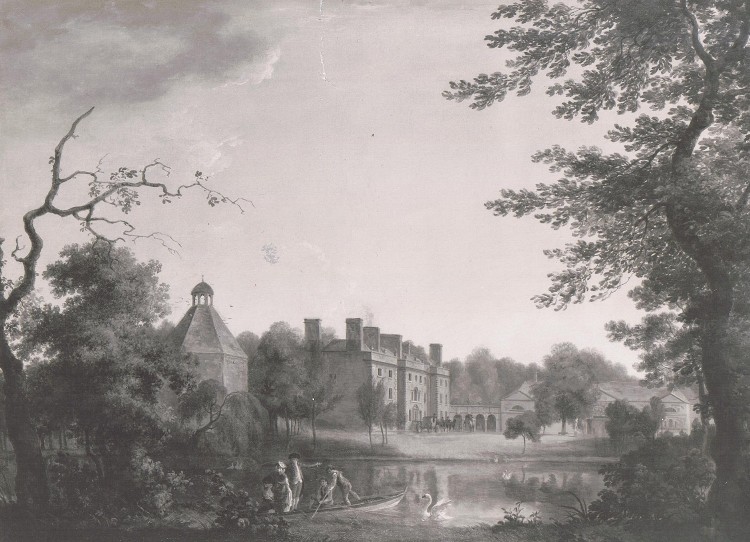 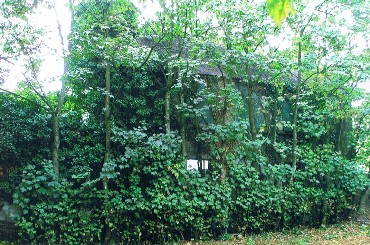 … when safely packed in, John jumped on the shaft, and we soon reached our destination. A long white house covered with creepers ,
some of which I have never seen elsewhere (one in particular called a “tea tree” with brown blossoms hanging in little
bunches like those on a currant bush) , low, wide windows with granite sills, an orchard on one side, green meadows on the other.
The house stood on the roadside. 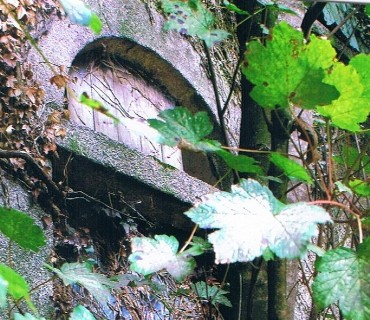 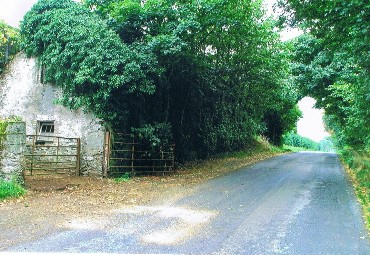 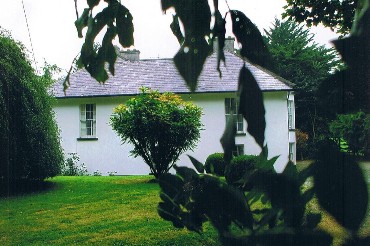 A quiet peaceful road. Opposite, was a low wall behind which was a row all large trees,
which hid from view another house which, I believe is still standing. 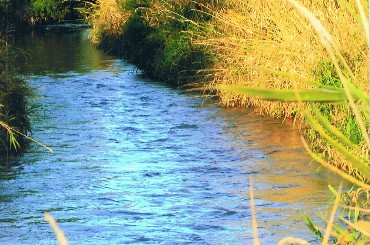 The road sloped down from the orchard to the River Greese, a clear, sparkling dancing river.

A tiny mill with a big wheel made a delightful feature in the landscape,
and many an hour have I sat by it, entranced and watching its rushing waters,
at other times catching or rather trying to catch cray fish for our tea. 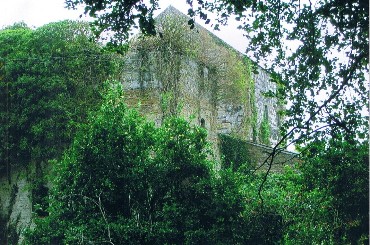 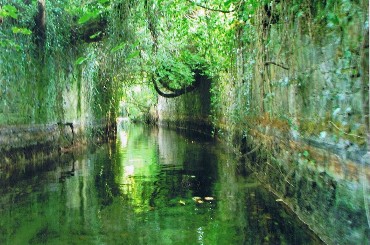 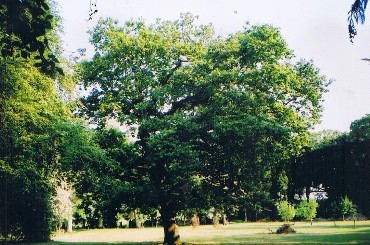 On the other side were the beautiful trees and grounds of Belan castle,
which I believe was its proper name, but I never heard it so called , only Belan or the Great House.

But to return to our arrival. At the door stood our dear hosts, warm was our welcome.
We were at once ushered into the dining room, where a blazing turf fire was alight, with its delicious smell and white ashes.
On the chimney piece stood two jardiniÃ¨res, all green, landscapes, figures and flowers in different shades and two shepherdesses,
sitting smiling under impossible flowering trees. Then came the tea, hot potato cakes, and eggs with milk in them, the cream,
the honey and the jam. Oh! Why don’t we burn turf, and feast on potato cakes now? Off the dining room came the drawing room,
in which I remember a very handsome mirror, with an eagle on top, a painting of the Virgin and the window seats and what is
so pleasant as sitting in a window on a low seat? Next was our bedroom, with the same sort of windows,
all of them looking on the quiet road.

Awaking very early next morning, the low barking of the dogs,
the singing of the birds, the quacking of the ducks, the many sounds and scents of the country were delightful
and no sooner had we finished our breakfast than we were off, as fast as our legs could carry us, to the Great House.
There it stood in its lovely grounds, itself a beautiful object – a fine stone mansion, a magnificent flight of granite
steps, with two stone vases at the top, led to the entrance door. Though uninhabited for fully ten years, the house was
in perfect repair, no trace of damp or decay and to all appearance, might have been lived in a week before. I have not a
distinct recollection of all the rooms; but the dining room is fresh in my memory, also but the saloon, and his late
lordships bedroom. The dining room, not very large was panelled, family portraits being set in the panelling.
I was too young to care much about them, but feel sure they were all of men. Had there been lovely ladies or pretty
children amongst them, I should have remembered them. The saloon was lovely, with a polished floor of narrow oak boards….

….It was a bright, sunny room, and looked as if lived in the day before. Child-like, I never thought of asking why it was inhabited,
what formerly had taken place in it, but took for granted things had always been as they were, and would continue so, and lived in full
enjoyment of the present on one occasion (why I know not) my sister and myself occupied his late lordships bedrooms, very comfortable
it was of moderate size, the fireplace like those of the other bedrooms surrounded with the prettiest tiles I have ever seen,
the ground white with pink and blue landscapes, figures and flowers on it; a fine four post mahogany bedstead, Indian chintz curtains,
some Chippendale chairs, and a wardrobe are all I remember of its furniture. The house was taken care of by a man named Mercer
and his wife Hester…..

…….The grounds of Belan were very beautiful, and of considerable extent.
On one side though not seen from the house, were the celebrated fish ponds (not that in my time there was a fish in them),
large and deep, the trees around them giving them a secluded and fascinating look. Here, on hot summer’s evenings,
we used to sit and watch the dragon files. I had never seen dragonflies before, and could not associate them with flies-I
could only think of them as tiny winged spirits, whispering messages from afar to the reeds and irises which grew at the waters edge.
The gardens were at some distance from the house, and were large and walled in. I do not think I was often in them.
What struck me most was the enormous quantity of lily of the valley. I have never seen anything like it elsewhere and its scent
lingers with me still.

I have hither to been writing of Belan as entered from the side by the river: but the grand entrance was approached
from Moone by a long queue with a wide piece of grass on either side, with trees at the back very handsomeâ€¦. â€¦.
This avenue was ended by a very high and beautiful gate, on either side of which were low, white circular walls,
with a tree at the backâ€¦. 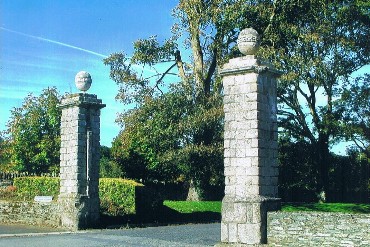 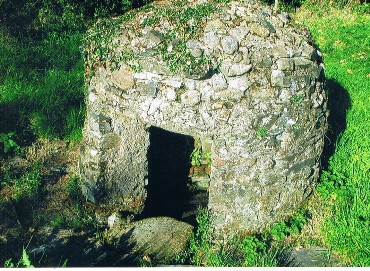 …… On a St Patricks morning every matron, maid, and woman child at Belan flocked to the `Great House`
and up the granite steps, on the top of which stood Miss Best and my mother both beautiful young girls, their
baskets full of crosses, which they liberally bestowed, and were gratefully thanked for by the recipients, who
later in the day, the crosses pinned on their breasts, walked with parents, husbands and lovers to St Patricks
Meadow and there drank from St. Patricks Well, the water of which was considered holy….

…..Lord Aldborough and his brothers seem always to have been at daggers drawn,
and generally at law with one another, this would account for none of them ever visiting Belan.
After his death none of the Aldborough family ever resided there, and except when let, for a very short time,
to a Dublin solicitor named Lewis, no one, as far I know, ever again lived in it. The beautiful grounds
by degrees were neglected: the house naturally suffered from neglect and decay; who finally dismantled it ,
even to the taking the roof off, I do not know , but fancy it was the Earl of Aldborough, who we were told by
the newspapers, was kept so long alive by the use of Holloway’s pills. Whether his son joined him in any of the
devastations, I do not know . I heard that when almost penniless, he retired to some remote mountains in Spain,
and lived and died there, a flock of goats his sole companions. For the truth of this statement I cannot vouch,
it not having come to me through an authentic source but merely the variest hearsay, I have heard litigation alleged
as one cause of the ruin of the Aldborough familyâ€¦.

….Beautiful Belan lies in ruins, the wind blowing where
it listheth, sighs over the desolate grounds and gardens once so beautiful, a herd lives in the yard, sole occupant
of that once lovely demesne.
Thus has passed away a race more great wealthy and powerful;
and their name and their place are known no more.
“sic transit Gloria mund;” 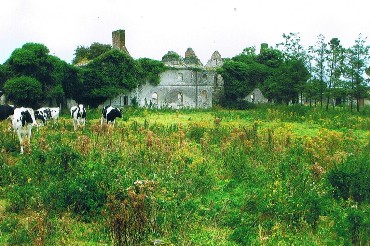 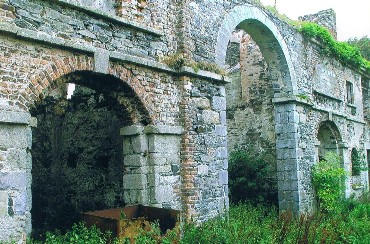 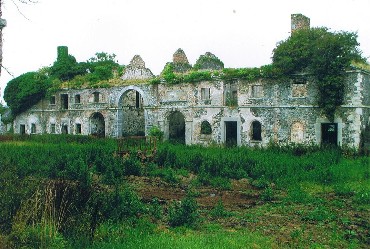 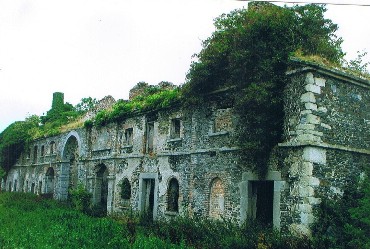 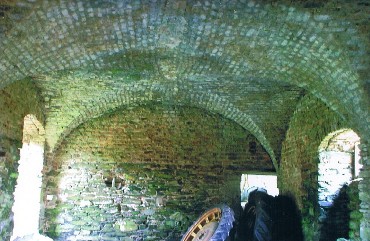 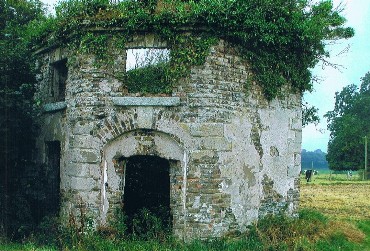 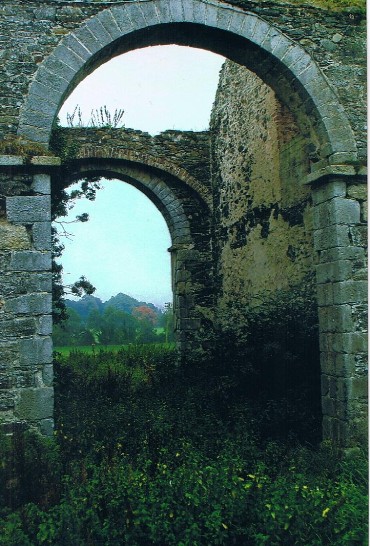 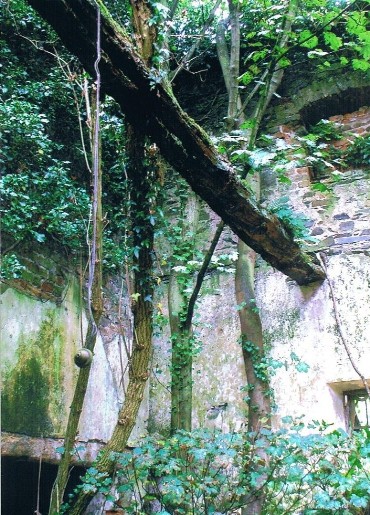 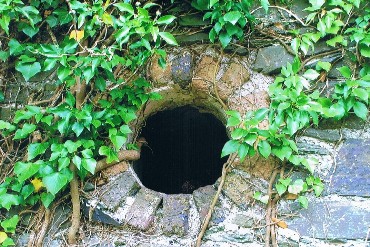 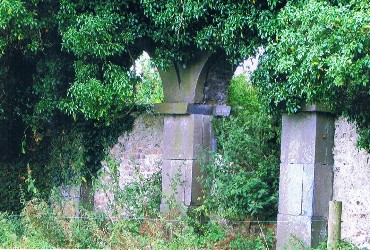